We use necessary cookies to make our site work. We'd also like to set optional analytics cookies to help us improve it. We won't set optional cookies unless you enable them. Using this tool will set a cookie on your device to remember your preferences.
I AcceptLeave cookies off
Competitions » A F P Fane Trophy Goodwood 79MM April 10th 2022 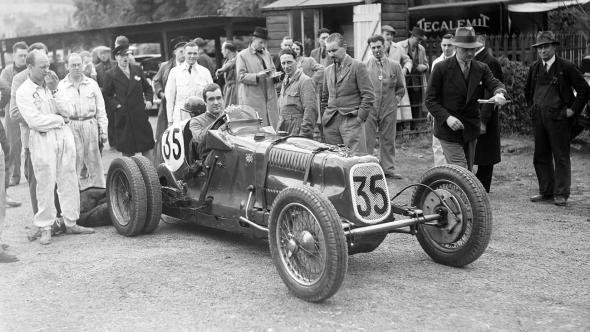 The cat is finally out of the bag... The A F P Fane Trophy is to be held at the next Goodwood Members Meeting on April 10th 2022. See Goodwood's announcement below:  (Further details to follow at the AGM)

The third race at the 79th Goodwood Members’ Meeting has been announced, a brand-new battle for pre-war Frazer Nash racing cars in honour of legendary driver and war hero A.F.P. Fane.

The race, over 20 minutes on Sunday 10th April, will see a full grid of up to 30 1930s chain-driven Frazer Nash cars battle on track, in what should be an incredible sliding showcase.  This year the S.F. Edge Trophy, Goodwood’s extraordinary battle for Edwardian “specials”, will take a year off. This leaves a spot for another pre-war race to be added to the 79MM roster and this all-Frazer Nash fight is expected to be the perfect replacement.

Anyone not familiar with chain-drive Frazer Nashes, and who wasn’t paying attention at the 2021 Goodwood Revival, can get a taster of just how exciting these slippery machines can be by watching Eddie Williams drift his Frazer Nash to victory in the 2021 Brooklands Trophy. Williams, sharing a car with Goodwood regular Duncan Pittaway, was rarely seen at any less than a 45-degree angle, delighting the Goodwood crowd with some incredible displays of car control on his way to victory. At 79MM there will be 29 other Frazer Nashes all fighting for victory.

Born in 1911 Alfred Fane Peers Agebag, would use his middle name as his surname for his racing career. Fane started his racing career in the early 1930s, racing and winning at Brooklands in 1931. The next year he bought his first Frazer Nash, and went on to win a number of class victories in British hillclimbs.

Such was Fane’s like of the Frazer Nash he would become a shareholder in the holding company in 1935, going on to set a new hill record at Shelsley Walsh before racing in Grands Prix and at Le Mans for the company.

Deemed too young to become a fighter pilot in the Second World War, Fane would flew reconnaissance planes with the RAF Photo Reconnaissance Unit. He lost his life in bad weather returning to the UK just short of his 100th hour of flight time.

Frazer Nashes raced in period in almost every level of motorsport available, achieving victories at Brooklands and in Grands Prix, the RAC TT and class wins at Le Mans and have been regular sights at Goodwood in both the Revival and at the Members’ Meeting. This will be the first time the revived Goodwood Members’ Meetings have seen a one make race for Frazer Nash cars.

Please be aware that, even if you filled in the form your secretary emailed out, and paid, you still need to fill in the entry form, below! The Fra......Read more