We use necessary cookies to make our site work. We'd also like to set optional analytics cookies to help us improve it. We won't set optional cookies unless you enable them. Using this tool will set a cookie on your device to remember your preferences.
I AcceptLeave cookies off
Competitions » Etretat 2017 - results 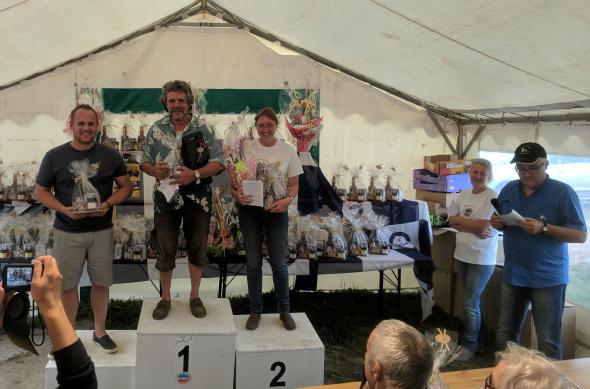 Our annual pilgrimage to Etretat went off well – the returning participants nursing hangovers, over-full bellies and sunburn.  Once again we have Tim Pryke to thank for organising the Nash contingent and Michel Deldon and his colleagues for providing us with a weekend of great competition.

Julian Grimwade was the fastest pre-war entrant, while David Leigh was fastest of the vintage racing cars and Jo Blakeney-Edwards the quickest sports car.

David Knight was enjoying the first outing in his newly-acquired Le Mans Rep and was getting to grips with it over the weekend.

The full results of the Nash entrants in the event were:

Paul Baker didn't get his last practice and first timed run as the oil pressure warning light switch split and started leaking  oil all over the place! Still, it was really lucky that it happened on the start line and not 30 seconds later which would have dumped oil all over the track and probably hurt the engine to boot... Fortunately Paul was able to get a blanking fitting from one of the MG crowd which let him run on Sunday.

And worth mentioning that Jo got the best sports car time in spite of a badly misfiring engine which thwarted all attempts at curing it - she got through 3 coils!!