We use necessary cookies to make our site work. We'd also like to set optional analytics cookies to help us improve it. We won't set optional cookies unless you enable them. Using this tool will set a cookie on your device to remember your preferences.
I AcceptLeave cookies off
Competitions » Snetterton weekend 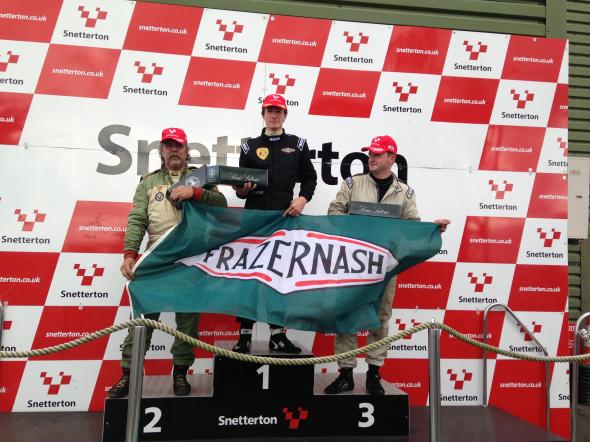 With a Saturday sprint, Sunday morning Autosolo and a full race meeting, this was a busy weekend - with the weather playing a major role.

The Sprint practice runs were all completed in the dry, then we went straight into competitive runs - the hope being that everyone's first runs would be dry.  But this wasn't to be.  After most of the sports cars had done a first run, with Jo Blakeney-Edwards leading the rankings, the heavens opened - and the rain continued, on and off for the rest of the day - with a good run becoming one that stayed on the tarmac! With many of the fast cars going mudplugging (Cognac and the Norris among them) Jo's time stood for the rest of the day and she ended up victorious with FTD.

The Autosolo, conducted entirely in the dry, had a small entry - but a good proportion of FNCC cars.  In the long-wheelbase class Annabel forgot her manners and beat David Knight, whose car she was sharing, to win Class Two, with David in Second place and James Portway in Judy's Anzani coming fourth.

The afternoon's racing had interesting conditions, with the highly localised rainfall leading to a track of two halves for some races - a true challenge for the drivers.  Nashes stood up well to this and dominated the podium:  The Donington Mug (Set 4) race saw Patrick B-E, Eddie Williams and Dougal Cawley bring in a chaindrive 1-2-3.  This was immediately followed by the Vintage and Historic Seaman Trophy Race, in which Patrick had his first VSCC outing in the Fane single-seater.  He won this race as well, taking the Historic Seaman Trophy, for which Eddie Gibbs came third.  Fourth over the line and first Vintage was Tony Lees in Cognac, taking the Vintage Seaman trophy.

Race 5 saw Eddie Gibbs on the top of the podium, with Julian Grimwade coming in third, while in Race 6 (a handicap) Jo B-E took third place.

The Intermarque Challenge Race was an innovation, with only Frazer Nashes, MGs, Rileys and Austins invited to enter.  The podium places were taken by Eddie Gibbs, Julian Grimwade and Eddie Williams but the team result placed us second to MGs because, with Piglet's bevel box giving way, we only mustered five finishers.

All round, this was a fabulous FNCC weekend, with Jo's FTD and Patrick's success in the Fane being truly memorable.