We use necessary cookies to make our site work. We'd also like to set optional analytics cookies to help us improve it. We won't set optional cookies unless you enable them. Using this tool will set a cookie on your device to remember your preferences.
I AcceptLeave cookies off
Competitions » Oulton Park - GN and Frazer Nash wins 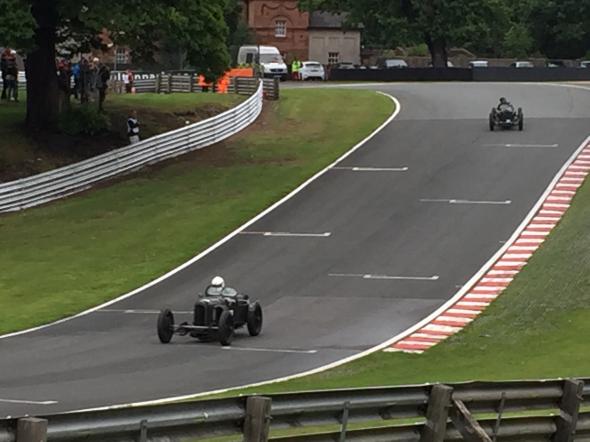 Justin Maeers, Parker GN, was out dragged at the start of the  all-comers race by Tom Walkers' Amilcar, and ran in second place for the first laps.  Then the GN overtook and started to pull out a lead, Tom Walker suffering from overheating brakes. All the chain drive cars (Tom Waterfield GN Ford, Mark Walker GN Thunderbug, Charlie Williams in the Frazer Nash Super Sports.) finished the 20 min race.

Dougal Cawley reattached his exhaust pipe, which fell off in practice, and led the 15min race for special and modified sports cars from flag to flag. Tom Waterfield lapped consistently in the other Ford engined car.

The next race for Ferrari was stopped in a strange incident when the safety car had to be red flagged as its radio wasn't working. Birthday Girl Jo B-E and husband Simon  took their places at the front of the grid with Eddie Williams on pole for the standard and modified sports car race. Eddie led the pack into Old Hall, and unfortunately Jo retired after the first lap. Simon had a race-long duel with Butterworth's V-12 Lagonda, slowing slightly at the end with slightly overheating 4ED engine. Eddie held a good three second lead from an HRG to finish a comfortable winner

The Boulogne Trophy for Vintage cars had six chain drive cars on the grid. In a rerun of the all comers race Justin Maeers chased Tom Walker's Amilcar, followed by Tony Lees, Cognac GN, Charles Gillette FN Super Sports, and Dougal Cawley GN-Ford.  Further back Tom Waterfield led Mark Walker for the first four laps until the Thunderbug slipped ahead at Old Hall. These positions remained for the rest of the race until the last lap when Dougal Cawley's clutch made some very mechanical un-clutch like sounds and spoiled the 2nd, 3rd 4th and 5th Frazer Nash finishing order.