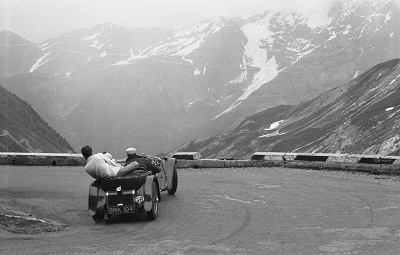 The first Captain of the Club, ‘Doc’ Harris, often referred to a wish that everyone could go on a jolly to the Alps to celebrate the Frazer Nash successes in the Alpine Trials of 1932,’33 and ’34.

This stirred the imagination of the Registrar, David Thirlby. In 1968 he read an article in The Times which kick-started correspondence between him and The South Tyrol tourist office in Bolzano. Just a few months later David and his wife in a borrowed Frazer Nash, Michael Bowler from The Motor and Dennis Jenkinson from Motor Sport travelled to Bolzano to organise an event for 1969.

The car went by train from Ostend to Innsbruck and over the Brenner. The vibro-massage of the train journey loosened things somewhat. David found himself in front of the assembled might of the South Tyrol Tourist Board welcoming party, working on the car; something that obviously created a good impression.

The team gained the co-operation of the town, the police and the local car club so that Frazer Nashes could enter a ten-car class in the International Hill Climb, the Corsa della Mendola. The Tourist Board arranged a staggering deal with the Luna-Mondschein hotel, and offers of parties came from every small town around.

The idea of a large group of cars driving en masse to the continent, competing in a serious event, spending many days exploring the area and then driving all the way back again just hadn’t been done before. This first Raid to Bolzano was breaking new ground. It was a complete success, though not without some considerable mechanical problems – all of which were overcome, and has gone down in the Club’s history as THE FIRST GREAT RAID. Every ten years, the Club organises another Raid to Bolzano, each of which is different, memorable and successful, but the uniqueness of that 1969 Raid is very special in the memories of those who were there. Denis Jenkinson the famous continental correspondent for ‘Motor sport’ magazine travelled out with the Raid with plans to continue his journey onwards to report on the French Grand Prix, However such was his enjoyment of being involved with the Chain Gang that he never made it, saying "The French Grand Prix happens every year – This ‘Nash trip is something special!"

However, it is not only to Bolzano that the Club travels. Raids are organised on a regular basis within the UK, onto the Continent and also much further afield.

In 1968, when the quotation came from the Luna-Mondshein hotel, the proprietor called the jolly a ‘Raid’. The Italian word Raid had been borrowed by the Italians into their language from English and had drifted, after the Second World War, from meaning an armed sally to that of an historic rally. However, the inference that comes from the word Raid of something daring and slightly clandestine reflects perfectly the character of trips organised by the Club. They have been referred to as Raids ever since.