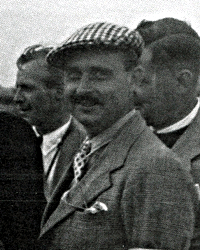 'Doc' Harris attended Trinity College, Dublin where he met his great chum, Dudley Colley, through their shared interest in cars.

They appreciated that a GN Special was the car for hill climbing, and bought three or four GN wrecks. From these they produced the 'Horror' with, at first, a standard GN engine.  They discovered that Colley’s father’s1938 Triumph 10HP saloon had a lightweight revving engine which was lying around unused.  This was fitted into the Horror and Doc Harris got FTD in a minor hill climb, the De Selby outside Dublin. In 1957 Dudley Colley's book 'Wheel Patter" was published, and chapters on ‘Dippy’ Harris (Doc's initials were D.P.) are full of GN and retrospection.

Doc Harris had a GP practice in Coalville in Leicestershire.  The patients approached by a corridor on the ground floor with a stone flagged floor with benches on both sides, this doubling as the waiting room.  The floor was often wringing wet and any suggestions to improve on the lack of comfort were rejected as being ridiculous. However, Doc Harris was held in the highest regard by his patients.

During 1947 a highly unofficial Grand Prix was held at the deserted Silverstone airfield by several Frazer Nash owners, following a social meeting the previous evening at the Mitre Oak, Ombersley.  Eleven Nashes raced round and round Silverstone till they practically all broke down, and Douglas-Osborne killed a sheep in the process. Nobody remembers who won the "Mutton" Grand Prix.

Paul Wakefield and Douglas-Osborne organised the 1947 party at the Swan, and presented to the owners the alternative courses open to them: either joining the club, as the Works had suggested, or joining the Vintage Sports Car Club as a section (during the previous year Paul Wakefield, Douglas-Osborne, the Bickertons, and Geoghegan held talks with Bob Ewen, Sam Clutton and Tim Carson of the VSCC).  The meeting accepted the offer of the VSCC, and the Section was duly formed, with Doc Harris as Captain and Douglas-Osborne as Secretary.

Over the next 15 years, Doc lead as Captain and, with a large majority of the committee, treated the Section as a private club; their aim was to race, attend the annual Chain Gang Silverstone race and the Xmas Party.

During those years there was never an issue about succession. ‘Doc’ was the unchallenged Captain, lead the Section, made most of the limited number of decisions needed and that was it. He was almost universally popular; respected amongst established members and very welcoming to new ones. In those impecunious days he understood the effort needed to keep Nashes in often daily use. He set the style and direction of the Section post-war, never allowing the sporting essence of the marque, or its suitability for competition, to be overlooked. And the rakish angle at which he always wore his cap was surreptitiously echoed by many a nameless member!