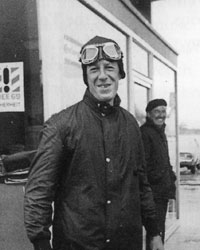 My first contact with Frazer Nashes occurred when I was a student at Loughborough University, studying Mechanical Engineering from 1949-54. It so happened that Doc Harris, captain of the Frazer Nash Section at that time, and Bob Gerard were both living in the area and took a keen interest in the University’s very active motor club. At our Annual Dinner we used to have people like Lawrence Pomeroy, Raymond Baxter and Bob Gerard to speak. Doc Harris was very supportive, sometimes competing in the University club night rallies. One day, Doc took me out in his Nash and that was it. I was hooked!

In September 1951 I bought a 1930 Meadows-engined Interceptor, PG 7028, which I think hadn’t run since the war, and of course I joined the Section. Just a few years later, I took on the role as Acting Secretary when Peter Douglas-Osborn’s health began to fail. Then, in 1966, I was extremely honoured to become Captain after Nigel Arnold-Forster. The final year of my captaincy was dominated by the great Raid to Bolzano. It truly was one of the most marvellous things I have ever done.

On that trip some we competed in the Autoclub de Bolzano’s Mendola Hill climb. The police closed the whole of the road for us. When we got to the top there was a German in a big Mercedes and when he discovered he’d been kept waiting for an hour while 34 Nashes came up the hill, he was seething. The police thought this was the greatest thing ever!

Having been bitten by the flying bug following a flight in a Chipmunk, I took the big decision to sell PG 7028 in 1976. However, I am most heartened that the car has been campaigned by its two successive owners, and still enjoy hearing about the exploits of the Chain Gang.