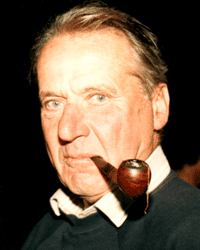 Derek had perfect manners and expected the younger and some of the more boisterous older members to behave in a similar way when the section was on public display. If his pleas were ignored, he would cry out: "Members of the Frazer Nash Section get in your motor cars and go Home".  Derek drove a car in the pre-war Alpine trials, not a Nash but some kind of sewing machine. He smoked a very large pipe the exhaust from which rivaled that of a Princess Coronation locomotive pulling a heavy load up Shap. His pipe smoking caused a memorable incident at a Christmas party held at the Falcon in Stratford on Avon, when Derek lit up under a smoke detector. Suddenly the bar was full of men in yellow jackets and hard hats trying to clear out the chain gangers, who didn’t believe they were firemen, thought they were in fancy dress and offered to buy them drinks. At a posh Porsche dinner in Birmingham, John Aldington asked the Chain Gang to liven up the event. Mistake. Freddie Giles, Dick Smith and MarkJoseland were firing paper aeroplanes which somehow became filled with cream. Derek joined in but also set fire to the tail of his plane before launching it across the ballroom. Derek then encouraged Dick and Freddie to drive Mark’s car into the hotel foyer and remove the wheels. Luckily being Mark’s, no oil was dropped.