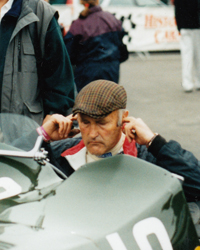 In 1960 my wife, Rosemary, bought me the Nurburg as a wedding present and I’ve been an ardent Nashman ever since.

In 1974, AFN Ltd held a party in the Hotel Metropole in Birmingham, and John Aldington asked the Nash Section to come along “To keep things lively”. Lively it became – VERY! Half way through the evening, Chris Chilcott remarked to me that there were no Chain Gang Nashes in the hotel, only post war ones on display. So we went out into the car park and selected Mark Joseland’sAnzani car, because it was oil-tight and also a trials car, able to climb the many impressive steps up to the automatic plate glass doors above. The doors opened outwards to our alarm, just missing the car, and we were into the foyer, parked it on the carpet and disappeared. Mark was nearly arrested when the police arrived.

When the call came for me to be Captain, I was a bit surprised, considering the above incident. As Captain, I decided my job was to lead the Section into competition battle and so I not only competed as hard as possible myself but spent a great deal of time and energy leaning on members to get their cars out and compete, which they certainly did. I was very grateful and proud of the Section’s success.During my Captaincy I tried to get the VSCC to accept the more pleasant post-war sports cars into the club, so that post-war Nashes could compete under the VSCC with our pre-war cars, but was not successful.

Fred and Jan Giles organised an absolutely super Raid to the French Alps, which like all Raids was full of happiness, laughter and adventure. The highlights were a closed road speed hill climb and, for me the best, an over 200 mile charge through the mountains timed out of the hotel and back in again – shortest time wins.
Guy and Nina Smith organised a raid to Donington Park and Derbyshire Dales, staying at the very pleasant ‘Peveril of the Peak’ hotel. There was a hard fought race of both pre- and post-war Nashes. The events and dinner were graced by the presence of Paul Frere (ex-Works Ferrari F1 and sports car driver), Tony Crook who raced post-war Nashes when they were new, with great success, plus John Aldington.

The social side of the Section was as usual a riot. At one Nash Christmas party I was standing making the Captain’s speech when I became aware of someone moving a chair behind me, so I ignored it. Next thing I knew was something being pushed onto the top of my head. Chris Chilcott was standing on the chair and had pressed one of those child’s plastic steering wheels, mounted on a large rubber suction pad, onto my slightly moist, bald head, and started ‘steering’ me as I spoke. The assembled throng was in hysterics. The more I tried to make myself heard above the racket, the more Chris corrected the ‘slides’ to the huge pleasure of everyone. When I eventually sat down, we couldn’t get this device off my head. People were pulling it this way and that. “It will need a hammer and chisel” said someone. Suddenly, a very attractive, beautifully dressed lady appeared with a twinkle in her eyes. “Step back, boys,” she said and laid the surface of a very long thumb nail on my scalp and poked it under the rubber, which, with a loud “Plop!” flew off and landed on the floor. There was quite a large bruise on top of my head and on the following Monday one of my more straight-laced dentist partners suddenly said to me, “Good lord, Richard. What have you done to your head?” “Last Saturday,” I replied, “I attended the Frazer Nash Christmas Party and …” “Don’t tell me anymore!” he interrupted.

I was very fortunate in having a very loyal, hard-working Committee and officials to help me. I would also thank in particular my ever-loyal, kind, understanding and helpful late wife, Rosemary, and my three sons for the amount of hard work they did on my Nashesduring the Captaincy.