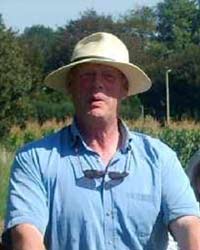 I can’t believe it was nearly twenty years ago!! The first year took us to Harrogate and the Yorkshire Dales, culminating in a hill climb at Harewood in the most appalling wet weather, with most of the normally stalwart members retiring early! Those that saw it through had Barbour jackets on top of their racing overalls – not entirely approved by the officials – but needs must! The whole thing was organised beautifully by John Malyan, who, together with Robin and Gweneth Parker, organised the following year’s trip to Scotland. My input was confined to ensuring that we went to the northernmost area of Sutherland. In my last year, Trevor Tarring took us to a memorable Boulogne and then on to Laon and a quite disgraceful and very enjoyable lunch at Boulard et Fils, preceded by a wreath laying at the village cemetery. Lunch was notable for an unscheduled cabaret by one Bullett, M. As somebody remarked, “it’s amazing what you can get in a plastic cup” – and standing on the table!

Brilliant Committee: secretary, John Terry to break me in, followed by the excellent and ever efficient Phil Hingley. I don’t think I really did anything except perhaps to delegate – idle blighter!