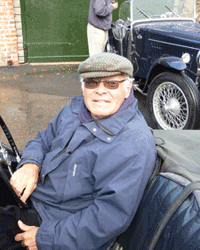 Back in about 1965 I enjoyed a Frazer Nash Club picnic held by Betty Haigue, and this formed the first of three ambitions. The first was to host the Frazer Nash picnic which Gill and I managed to do twice in the mid-nineties. My second ambition was, for some strange reason, to take on the workload of being Club Captain. This I did from December 1996 to 1999 and which I enjoyed with great satisfaction and a lot of fun (Tom Threlfall had said to me, “enjoy it or don’t do it!”). Thirdly, was to have a collection of GN to post-war Nashes. This I managed to do, and had all five cars at the same time. My various cars were not only driven by me but frequently by various Club members on Raids and in competition.

So what did I do as Captain? I enjoyed myself!

December 1996 – took over from Tim Pryke, and managed to get twelve Nashes competing in the Pom. Also organized Don Aldingtons 90th birthday party in Hartney Witney.

1997 – organised the Raid to the Pyrenees with David Ridley and Gill where we competed in a regularity competition at Quillan. Frazer Nash race at Cadwell Park where the leaders all finished half a lap early prompting me to design and build the FN Abacas which was presented to Steve Roberts at the dinner.

1998 – again the Pom, where we had 10 or 11 entries. Raid to Ireland with 49 entrants. This was, I believe, the first of the international FN races held at Phoenix Park. Robin, Gwyneth and James Parker being the main organisers. 50th Celebrations of Club formation after the war. Set up sub-committee to revise and update Club Rules. At the Christmas Party Joé Frazer-Nash, as guest of honour, presented me with the ‘Captain’s Cup.’

1999 – discussions and correspondence with John Aldington on the  Club’s future roll with the Archives. Raid to Merano – we arranged with a committee, some 72 cars, three of them mine, that were flagged off by Joé Frazer-Nash at Silverstone. We held the final dinner at Mulhouse.

All of this was with help from our various committees, Club members and also Gill’s support.

Would I do it again? Yes, if health (and Gill) permitted it!