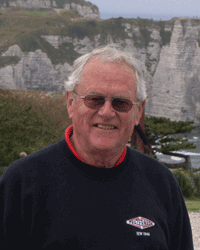 I had been a Member of The Section since acquiring my first car, my Boulogne Vitesse, over 40 years before being  elected as Captain in 1999. I had always been a regular competitor in VSCC events and was particularly active as Comp. Sec. in the 90’s and then as Captain.

Highlights of my three years were the “2000 in 2000”, which was the usual 1000 miles in 24 hours but with the added difficulty of two car teams in honour of the Millenium, followed by the Nash Teams overall win in the Birkett relay race at Snetterton  in the most atrocious weather. In 2001 we organised the first Sicily Raid to celebrate the 50th  anniversary of the1951 Nash win in the Targa Florio and with John Aldington’s help persuaded past  Nash racer Tony Brookes and his wife Pina  to join us. The tour with him of the old Syracuse circuit recounting his famous 1953 win in a Connaught was memorable. Also in 2001 we co-promoted a Sprint at the Anglesey circuit with Chester Motor Club which has become an annual event. In 2002 there was a short raid to the Isle of Man, organised by Robin Parker and his team, and a longer raid to The Picos courtesy of Roger Richmond and Peter Still culminating in the usual Nash Race at Angouleme. Altogether a memorable three years made the more enjoyable through the help and support of my wife, Anne, as “Captain’s Lady”.

Peter passed away in September 2020