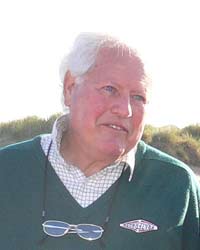 My father Cecil rescued Basil Davenport from a crashed, burning ‘Spider’ in an event in North Wales in 1922 and became great pals, so I always had an interest in the Chain Gang. I was friends with Basil from 1949.I joined the Section in 1974 and served on the spares committee for ten years.

My first ‘Nash event was in 1974 when I entered my GN Martyr at Curborough. Unknown to me John Malyan had also entered his first event in his GN Martyr.  Two cars claiming to unique – potential ‘hot Nash potato’ situation.The Captain, Freddie Giles, and members of the committee were in a state of consternation and were not to be seen until John and myself were spotted happily chatting on the way back from a pre-event visit to the little boys room.

I competed in my chain drive cars mainly in the 1970s and 1980s and for a few years I was very proud to hold a class record at Shelsley Walsh in the BHD.I may have a unique claim to fame as my two children and I were entered in the same race, all in Frazer Nashes - sadly my car failed to start. I also had the honour of driving Basil Davenport in the BHDfor what was his last ever run up Shelsley.

I organised the Archie Frazer-Nash Race Meeting at the Anglesey circuit in 2005. One of the highlights of the meeting was a flypast by a Lancaster bomber equipped with a Frazer Nash gun turret which dipped its guns as it flew passed Archie’s daughter Joé Watts Farmer. I asked Freddie Giles to organise a Nash picnic, which turned into a weekend event in Devises and I was able to arrange our own Spitfire flypast.

Gweneth and I enjoyed organising five Raids and several Nash Parties. I owned the GN Martyr, the GN BHD and a TT Replica Special.