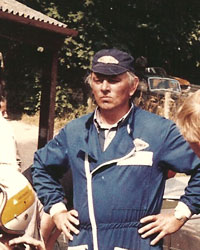 Ian Stirling was a graduate of Cambridge University, a chartered mechanical engineer and proud of his Scottish ancestry, being a distant relation of Patrick Stirling, the famous CME of the Great Northern Railway, who had designed the famous ‘Stirling Single’ express locomotive of the 1880’s. Ian’s engineering ability made him arguably the single person most responsible for the survival rate of both genuine and other Nashes today.

Ian joined the Nash Section of the VSCC in the 1960s. He competed regularly, firstly with his Nurburg AMD 553, latterly with the  1½ litre Alvis FWD engined Norris Special, enjoying considerable success with both. His finest hour and the result of which he was most proud, was winning the Nash class at the Mendola Hillclimb in 1979 in the Norris. However, it is his outstanding work on the Spares Committee which Ian ran for so many years for which every Nashman should be thankful. Ian was responsible for many of the major projects which kept our cars on the road and thus ensured their survival during the 70’s and 80’s. It should be remembered that in those days the cars were neither so valuable, nor the vast majority of the owners so affluent as nowadays.

Ian organised the manufacture of a huge range of spares, from front and rear axles to Meadows cams and blocks. He spent countless hours visiting ‘back street’ engineering shops capable of and interested in the manufacture of small batches of components. Cost of spare parts, in those days, was always a consideration, sometimes at the expense of quality, however anything the spares section produced would fit, albeit at times with a certain degree of fettling. Remember, this was way before the time of ‘professional’ fettlers, in fact in the early days a Nashman who couldn’t fix his car would have been laughed out of the Section. Ian was never one to suffer such fools, which, combined with his Cambridge upbringing didn’t endear him to everyone – especially the less mechanically minded members! Anyone phoning up to see if the Section could supply an aeroscreen wing nut just as the Scotland v England rugby match was about to kick off would, quite rightly, receive a short but forthright response! Your scribe remembers complaining to Ian when a newly purchased spares section sprocket carrier disintegrated after less than 40 miles – The Stirling response was "Those cast iron centres do that – you’re an engineer, you should know that!"

A great character to whom we are all indebted. (CC)