David Thirlby: PATRON AND great Scribe of the Chain Gang 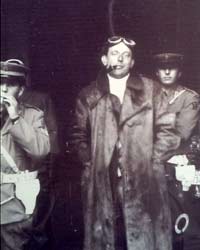 I got into conversation with Clifford England at the 1953 Christmas party at Tewkesbury and told him how much I admired him in his position as Registrar. After he found out I was serious he asked me if I wanted to undertake it and I said yes.  Later that evening he said in the AGM that I had been helping him for some time, and I was elected that same evening as the Honorary Registrar.
A few weeks after being in position, at a Committe meeting I proposed that, for a short time, I could edit a magazine.  Bill Boddy suggested the name of the "Chain Gang Gazette" and the Section allocated me £5 a year to be the editor. When the magazine started the £5 covered the postage. Dick Bickerton provided the paper, ex RAF, and the envelopes free of charge.
I knew what I had to do and that was to interview all the pre-war heroes; in the mid Fifties I started off with Ron Godfrey and Archie Frazer-Nash. I also searched through libraries and private collections and started to skim magazines from the Thirties.  Initially, Archie said he would only meet me for six one hour visits, but I met him some 20-30 times because he enjoyed talking to me.
Vaughan Skirrow and Nigel Arnold-Forster were my allies on the Committee. I suggested there was a lot of advantages in the 2-3-4 year maximum period of an officer being in position; Doc Harris had then been Captain for 15 years and he accepted the proposal immediately.
The one person I tried to get on the Committee was John Teague – but he rejected this, although he became Registrar for a short time after I resigned in a huff! The other top player who was never on the Committee was Lionel Stretton.
The next thing was to get the Section actively involved and so we got things started with a weekend in Boulogne in 1965, and then to the Nurburgring.  And, greatly daring, I did all the preparatory work for a Raid to the Alps in 1969, without telling anyone.  I have never been a committee man; I had to be in business, people in Dunlop did not take kindly to one man doing his own thing.  Dragging the rest along was the way I preferred it, as in organising the 1969 Raid.
Having bought PH3682 in 1952 or 1953, having fun over the years getting the Parker GN and Archie’s Plus Power to run, after 50 years as Registrar and having written many articles and five books, I decided to put my feet up. Daughter Dorinda took over the Anzani.