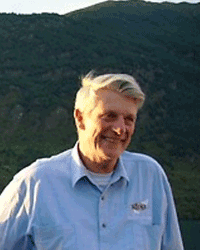 John Aldington’s association with Frazer Nash existed on many levels: he was the son of H.J. Aldington, M.D. of Frazer Nash Cars Ltd and later AFN Ltd; he became Patron of the Section, then Joint Patron of the Club with Joé Frazer-Nash; he owned consecutively four Frazer Nashes; he set up and ran the Frazer Nash Archives at Henley-on-Thames. With his father and two uncles, Bill and Don Aldington, who were also heavily involved with the company, John could not fail to be influenced by all things Frazer Nash.

He became MD of Porsche Cars GB Ltd. and also MD at AFN. However, it was the purchase of the Coxson dealership in Henley that provided John with the opportunity to fulfil his ambition of having a permanent location to house the Frazer Nash records and memorabilia that he had acquired over many decades. He commissioned Denis Jenkinson (“Jenks”) to write “From Chain Drive to Turbocharger”, the story of AFN Ltd., and this collaboration continued with Jenks assisting in the task of archiving countless boxes of documents and records.

John Aldington fought fiercely to protect the rights to the name of Frazer Nash for the Club, both with regard to the manufacture of spares and also in use of the marque. He generously donated his four cars – the 1925 Plus Power, the Blackburne-enginedByfleet, the Le Mans Replica in which Moss won the British Empire Trophy and the unique post-war Cabriolet – to the Archives, and endowed the means whereby the Frazer Nash Archives could continue his vision.