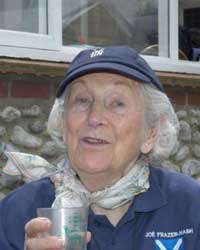 There was no greater supporter of the Club than our recent gracious Patron, Joé Frazer-Nash.  Nor could there have been anyone more worthy of the title, for she was the younger daughter of Captain Archie Frazer-Nash. As a young woman, Joé worked as her father’s personal assistant, accompanying him on the Queen Mary to the United States just before war broke out, in connection with his work on the development of the Frazer Nash gun turret. Having been christened Barbara, Joé adopted her unusual name whilst visiting Hollywood for a screen test, and it stuck ever after. (Here's an interesting fact: John Parry-Thomas named his world land speed record-breaking car "Babs" after meeting the little Barbara Frazer-Nash, when he was visiting her father.)

Joé's support of the Club manifested itself in many ways: at the start of every major Raid undertaken by Club members, and at our Christmas Party, there was always a message sent by her to encourage our endeavours; it is thanks to the generosity of Joé (and her sister Marion) that Capt. Archie’s cups and trophies won by him during the 1920s now form a good part of the Club’s trophies competed for annually; similarly, there are some very proud Club members to whom Joé awarded, for great service to the Club, one of Capt. Archie’s competition medals; Joé also sponsored a four-car Frazer Nash team in the Six-Hour Birkett Relay Race on a number of occasions, standing on the pit wall and cheering her boys on.

The Club celebrated Joé's 90th birthday in fine style at her home village in north Norfolk a few years ago. Now, seven years later we mark the passing of a remarkable lady.