We use necessary cookies to make our site work. We'd also like to set optional analytics cookies to help us improve it. We won't set optional cookies unless you enable them. Using this tool will set a cookie on your device to remember your preferences.
I AcceptLeave cookies off
News » Goodwood results. 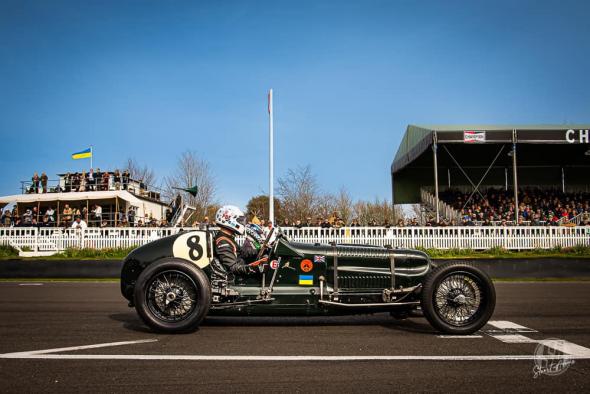 Patrick Blakeney-Edwards drove the Fane Single Seater to a convincing victory in the AFP Fane Trophy at the 79th Goodwood Member's Meeting on Sunday.  Martin Stretton, in the Gibbs SS was second overall, and Tom Waterfield in Tom Lovett's Super Sports took third, also bagging quickest lap of the race.

Further down the field were several other hotly contended battles, including Julian Grimwade & Fred Wakeman battling for 4th place, (taken by Fred)  Andrew Hall in BAM, Theo Hunt in Martin's TT Rep  and Nick Swift driving PBE's saloon, Owlet, all finishing withing a second each other for 9th, 10th & 11th place respectively, then Simon B-E, Dougal Cawley (heroically driving Piglet on skinny ice raid tyres so he could do the skids that we'd promised Goodwood) Phil Champion and Jono Fenning fighting for 14th place, and finishing in that order, again within just over a second of each other.

Very sadly, the race was stopped under a red flag as Paul Waine had a nasty accident at St Mary's - we all wish him well and hope he makes a complete and speedy recovery.  The spectacle of 30 (unusually shiny) Frazer Nashes warming up in assembly was a sight that will stay in the memory for a long time, and it was a real privilege to be part of this very special event.

Congratulations to Patrick - how fitting that the Fane car won, Martin & Tommy, and also to our winners on handicap:  Jono Fenning, 1st hcap in the Emeryson Special, David Pryke 2nd hcap in his Shelsley SS and Chris Batty, 3rd hcap in the Bugatti-engined Nash.

A truly memorable occasion for all of us. If anyone has any photos to share, we'd love to see them, either on the website, or on our Facebook page.

Photo: PBE in the Fane SS, courtesy of Stuart Adams.