We use necessary cookies to make our site work. We'd also like to set optional analytics cookies to help us improve it. We won't set optional cookies unless you enable them. Using this tool will set a cookie on your device to remember your preferences.
I AcceptLeave cookies off
News » Something for you racers to aim for

Something for you racers to aim for 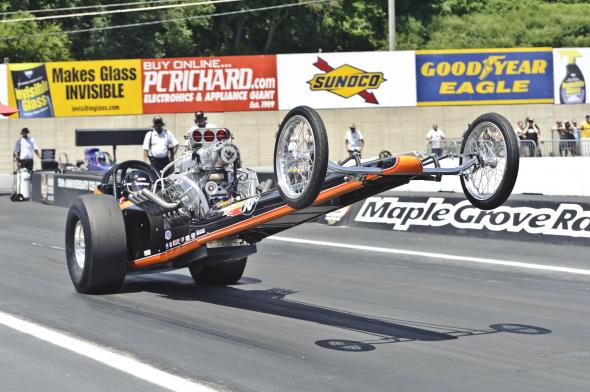 Good morning James, I thought this might amuse one or two FNCC members,  Graham Rankin

Stay with this - even if you aren't a 'car nut', this is stunning.  The physics and engineering of this race technology are amazing.

Ever wonder why a Top Fuel dragster gets a rebuilt engine after each run?

* Under full throttle, a dragster engine will consume 11.2 gallons of nitro methane per second; a fully loaded Boeing 747 consumes jet fuel at the same rate but with 25% less energy being produced.

* With 3000 CFM of air being rammed in by the supercharger on overdrive, the fuel mixture is compressed into a near-solid form before ignition. Cylinders run on the verge of hydraulic lockup at full throttle.

* Dual magnetos supply 44 amps to each spark plug. Which is typically the output of a small electric arc welder in each cylinder.

* Spark plug electrodes are totally consumed during a pass. After 1/2 way thru the run, the engine is 'dieseling' from compression and the glow of the exhaust valves at 1400 degrees F. The engine can only be shut down by cutting the fuel flow.

* If spark momentarily fails early in the run, unburned nitro builds up in the affected cylinders and then explodes with enough force to blow the cylinder heads off the block in pieces or split the block in half !!

* Dragsters reach over 320 MPH +... before you have completed reading this sentence.

* In order to exceed 320 MPH in 3.8 seconds, a dragster must accelerate an average of over 4 G's. In order to reach 250 MPH well before reaching half-track (500 feet), at launch the acceleration approaches 8 G's.

* Including the burnout, the engine must only survive 900 revolutions under load.

* THE BOTTOM LINE: Assuming all the equipment is paid for, the pit crew is working for free, & NOTHING BLOWS UP, each run will cost an estimated $1,000 per second.

The top speed record is 326 MPH plus as measured over the last 66' of the run.

To get an idea of the fuel flow, click below, 1st at idle, then full throttle... remember this is for only 1 cylinder, they have 8

Let's now put this all into perspective:

Imagine this: You're driving a new $140,000 Lingenfelter twin-turbo powered Corvette Z-06. Over a mile up the road, a Top Fuel dragster is staged & ready to 'launch' down a 1,000 foot course as you pass. You have the advantage of a flying start. You run the 'Vette hard, on up through the gears and blast across the starting line & pass the dragster at an honest 200 MPH. The 'tree' goes green for both of you at that exact moment. The dragster departs & starts after you. You keep your foot buried hard to the floor, and suddenly you hear an incredibly brutally screaming whine that sears and pummels your eardrums & within a mere 3 seconds the dragster effortlessly catches & passes you.  He beats you to the finish line, 1,000 feet from where you just passed him. Think about it – from a standing start, the dragster had spotted you 200 MPH.  And not only were you caught, but nearly blasted off the planet when he passed you within a mere 1,000 foot long race!