We use necessary cookies to make our site work. We'd also like to set optional analytics cookies to help us improve it. We won't set optional cookies unless you enable them. Using this tool will set a cookie on your device to remember your preferences.
I AcceptLeave cookies off
News » Single Seater in Australia 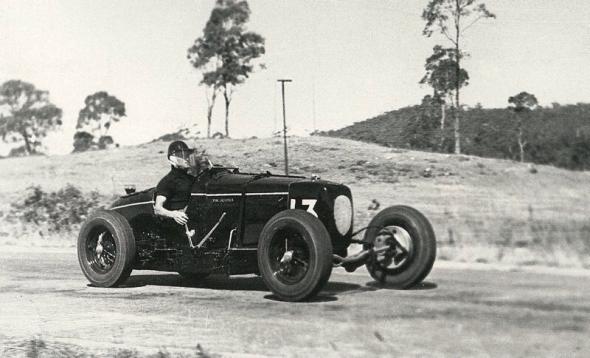 Hello James,
Thought these would be an interesting photos for the website.
I have been collecting information and photo's of the ex Mitchell- Thomson single seater which was exported to Australia in 1937.
Initially owned by Tim Joshua of Melbourne, Australia it competed in both Hillclimb's and Road Races in his ownership before the war.
In mid 1939 the unblown Gough engine was remove and a large lump of cast iron in the form of a side valve Ford V8 was fitted. It can't have been all bad as the car suddenly became much more competitive. At Rob Roy Hillclimb in October 1939 it improved almost 4 seconds to 31,17 seconds. This was 0.2 seconds quicker than Peter Whiteheads 1938 time in ERA R10B. The above photo was taken at Rob Roy Hillclimb in November 1938 and the main photo in January 1939 at the Australian Grand Prix in Lobethal South Australia. Colin Anderson was the driver. As best I can figure out these are the last two events it ran in with a Gough engine.
Regards
Grant Cowie