We use necessary cookies to make our site work. We'd also like to set optional analytics cookies to help us improve it. We won't set optional cookies unless you enable them. Using this tool will set a cookie on your device to remember your preferences.
I AcceptLeave cookies off
News » Busted in Montana! 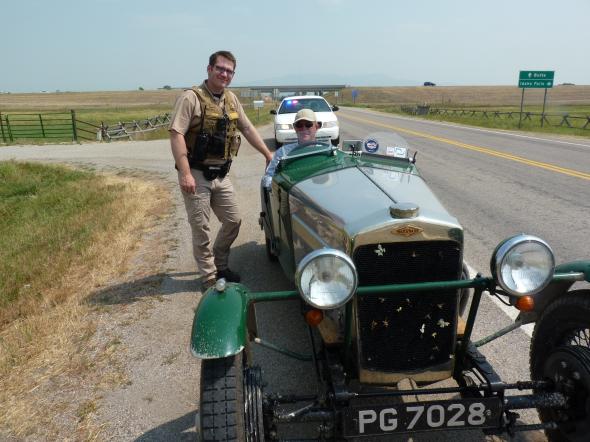 Photo: Take short a stretch of  interstate and look what happens!

Having just clocked 3,000 miles and needing to drive literally 4 miles along an interstate to continue westwards, we came down the slip road to continue along the road and are stopped by The Law. The Nash just doesn't like pulling away in first at this high altitude of around 6,000' so rather than coming to a complete halt at the stop sign, with nothing in either direction, we slipped across the stop line. Next moment there's the sound of siren being "whooped" behind us and we pull to a standstill. "I've pulled you up for bustin' a stop," says Sherrif Kruze. He'd been hiding under the flyover, lying in wait for varmints. There follows a polite explanation of the intricacies of S.U. carbs, chain drive Frazer Nashes and what a wonderful country you have, officer, and Sherrif Kruze is putty in our hands.

His eyes came out on stalks when he was handed Richard's somewhat tatty paper licence document. The ice was broken. There was no fine and he then admitted that he would have stopped us anyway, even if we hadn't done any "busting" of stop signs, just to have a lil' ole look see