We use necessary cookies to make our site work. We'd also like to set optional analytics cookies to help us improve it. We won't set optional cookies unless you enable them. Using this tool will set a cookie on your device to remember your preferences.
I AcceptLeave cookies off
News » Clement Engine Runs for the First Time in 110 Years

Clement Engine Runs for the First Time in 110 Years 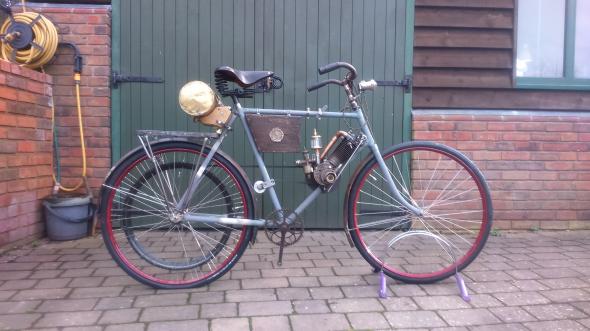 Club members with long memories will recall the story of Ron Godfrey’s Clement engine, and will be delighted to hear that after a lengthy and complicated restoration the engine has finally burst into life once again.

In his early days Ron was a keen motorcyclist, and one of his first machines was a 1.3hp Clement-Garrard.  The engine was manufactured in Belgium by Adolphe Clement, and sold as a ‘clip-on’, to be fitted to the front down tube of a convention bicycle. In England Charles Garrard of the Garrard Manufacturing Company fitted these engines to his bicycles, furnished with two-speed gearing, to be sold as a complete unit.  It appears that Ron Godfrey had a spare engine, which he sold to Archie Frazer Nash, who first of all fitted it to a pedal cycle, and subsequently used in one of the early ‘creepabouts’ which preceded the first GN.   The Clement, which dates from about 1903, is quite small, it displaces only 145cc and is a single cylinder four-stroke with overhead valves, the inlet being automatic, whilst the exhaust is actuated by a push-rod. From our point of view however, the most important feature is the overhung crankshaft, and we know that this layout influenced Ron in his design of the GN engine.  After removal from the creepabout the engine spent many years under Ron Godfrey’s bench.   Ron subsequently gave the engine to Bill Craddock, who in turn passed it on to Tom McEwan in 1990.

Tom is a man who believes that vintage machinery should be in working order, and the project has been taken on by Malcolm Lyon, a talented enthusiast for old motor bikes.   Malcolm has installed the engine in a period bicycle frame, and has devised suitably period  ignition and carburation arrangements.  It is hoped that it will be possible to demonstrate this hugely historical machine at the Frazer Nash Christmas Party and at other venues, and that it will finally find a home in the Archives at Henley.